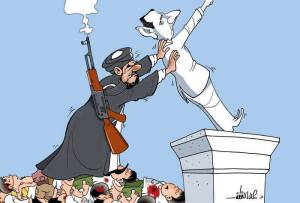 Syrian oppositional groups have repeated for a long time that Iran is actively suppressing the Syrians and their revolution by siding with the Pharao and Yazid of our time, Bashar Al-Assad, the Alawite, secular and Bathist tyrant. Not just ideological and logistical aid but rather military aid, Iranian troops actively fighting the Syrian resistance. All these reports by the Syrian oppositional groups were dismissed by Iran, its stooges and cheerleaders after a number of embarrassing blunders on the Iranian side and victories on the side of the resistance fighters who managed to capture video material of known Iranian Revolutionary Guards who activerly operate in Syria. This exporsure led finally to the addmission of Hassan Nasralla(t)’s that the Hezbolla(t) are actively operating in Syria to defend Shia places of polytheism (shrines), particularly the shrine of lady Zaynab in Damascus. In this article we’d like to show in chronological order of how deceptive the Rafidi regime of Iran is, the very same regime that tried hard (to save its face as long as possible) dismiss ANY (let alone military) involvement in Syria. You will be shocked of how blatantly Iranian officials lie, whether Revolutionary Guards or the unholy ‘Aytollahs’.

END_OF_DOCUMENT_TOKEN_TO_BE_REPLACED

More delusions of Rafidi-Safavi grandeur. How these heretics can even remotely attribute the Arab Spring to the FAILED Rafidi revolution of Iran (Bazargan said so, “Ayatollah” Sadiq Shirazi said so, so did many other Maraji’, let alone Sunni Muslims!) of the arch heretic Khomeini the accursed, is beyond any sane rational individual. Alhamdulillah from Tunisia to Libya to Egypt and Syria, all have resoundingly rejected and despised this ill gotten religion of lies and deception and its fortress, the Iranian regime.

This is the reason why the Syrian Revolution earned the title ‘Al-Thawrah Al-Fadhiah’. It has exposed long time hidden enemies like …

END_OF_DOCUMENT_TOKEN_TO_BE_REPLACED

This rotten regime was not getting tired to cheerlead all the Arab Revolutions that were in their interests (like Bahrain), but when it came to one of the olderst dictatorship clan in the world (the Al-Assad’s) suddenly the “defenders of the oppressed”, the Iranian regime and the major clerics of Rafidism (Shi’ism) around the world became (including the prostitute of the Safavid Rafidis in Iran, Hassan Nasrullat), became deaf, dumb and blind: