Imam al-Sam’ani mentions that the family of Dawud b. ‘Ali belonged to Kashan, a small town in the neighbour­hood of Isfahan (a large province). His father was a secretary (katib) to `Abd Allah ibn Khalid, judge of Isfahan, in the days of the Caliph al‑Mamun. According to al-Dhahabi, Dawud was a mawla (client/freedman) of of ‘Abbasid caliph al-Mahdi bi-‘llah (born in Iraq and died in what is known today as Khuzestan/Ahwaz). Dawud himself a was born in Kufah (hence al-Kufi) in 202/817.

Dawud ibn Ali has most commonly been attributed to the Iranian city of Isfahan (in classical Arabic often written as أصبهان/ Asbahan), often being referred to as “Dawud al-Isfahani” but he is also known as al-Kufi (where he was born) and al-Baghdadi (where he died and was buried). He is not attributed to any Arab tribe (very uncommon for scholars of Arab origin as their tribes are always mentioned in biographies) and since Kufa was a stronghold of Persian mawali (mainly Persian freedmen/clients of Arab tribes) it is not unlikely to suggest that his father was of Persian descent. 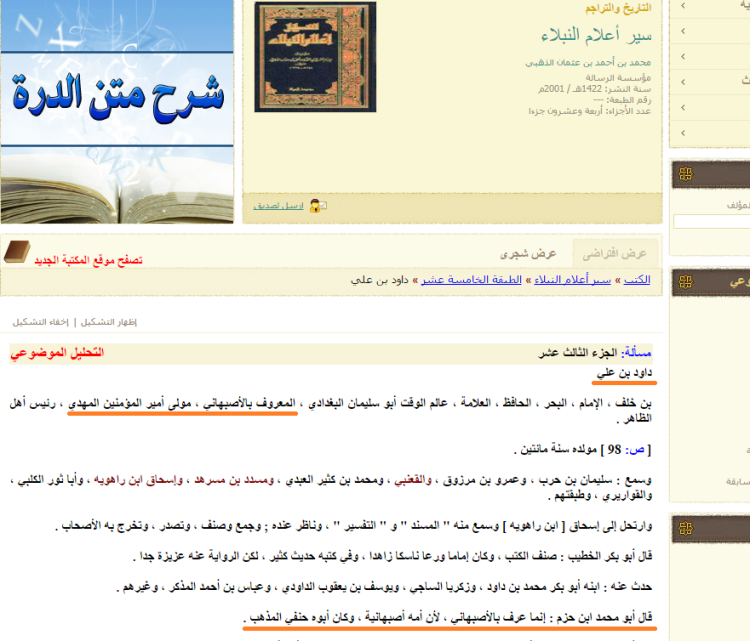 Ibn Hazm al-Andalusi (of Persian descent himself) and al-Dhahabi held that this attribution to Isfahan was due to the fact that al-Zahiri’s mother was a native of Isfahan.

Ibn Hazm said: “He (Dawud) is known as al-Asbahani (Isfahani) due to his mother being of Asbahani origin and he was also ‘Iraqi and wrote 18.000 papers.

While al-Zahiri school is not as numerous today as the other four major schools of Sunni thought, the Zahiri, or “Dawudi” school as they were known in Islam’s early stages, was once a major school and encompassed Mesopotamia, the Iberian Peninsula, the Balearic Islands, North Africa and Southern Iran (which even today has a large Shafi’i population). Even his contemporary critics conceded to his intellect and level of knowledge, even while rejecting his beliefs. He has been described as “the scholar of the era” by al-Dhahabi.

In terms of theology, al-Zahiri was described by Ibn Taymiyyah as having been upon the orthodox Athari creed, affirming the attributes of God without delving into their fundamental nature. Al-Shahrastani, a 12th-century historian of religions, grouped al-Zahiri along with Malik bin Anas, Ibn Hanbal and Sufyan al-Thawri as early Sunni figures who rejected both esoteric and anthropotheistic interpretations of God,[34] and both Ibn Taymiyyah and al-Shahrastani considered al-Zahiri and his students, along with Malik, Ibn Hanbal, al-Thawri, Abu Thawr, Al-Mawardi and al-Shafi’i and their students to be the people of the hadith, as opposed to the people of ra’y

Isfahan: Throughout most of its Islamic history (as it is majority Shiite for 500 years compared to its 900 years Sunni history) a stronghold of ethnic Persians to this very day. In Pre-Safavid era the vast majority of Isfahanis were Shafi’i and Hanafi Muslims, but the Zahiri school (and even Khariji schools) were also common in the city. Most Isfahani Persian Sunnis were either killed or forced to accept Shiiism. Many of them fled further south (where Sunni Persians still make up a large portion of the population).