One of the most senior Sunni scholars of Iran has passed away. He was Sheikh Al-Hadith Mohammad Yusuf Husseinpour from Sarbaz city. Unlike the likes of Khomeini (whose already extravagant mausoleum has been further renewed to what looks now like a Zoroastrian-Sassanian palace) and other Shia scholars and saints, no extravagant grave (let alone shrine or mausoleum) will be built for him, he will be buried in a simple and modest fashion as required by the shari’ah and as it is common among Sunni Iranians. 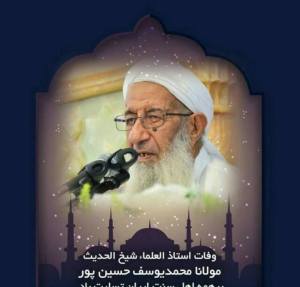