Eid al-Fitr 2017 prayers in Mashad, Iranian Khorasan province. Unknown to many, the city has a Sunni population (Khorasani Persians) of around 15-20%. In fact Mashad is one of the few majority ethnic Persian Shia cities with a sizeable indigenous ethnic Persian Sunni community (most Sunnis in Tehran, although Iranian are not indigenous to the city). Iranian (Khorassani) Persian Sunnis are basically the indigenous people of the city and region who have either survived the Safavid onslaught or managed to avoid forced conversions to Shiism in the 16th century. 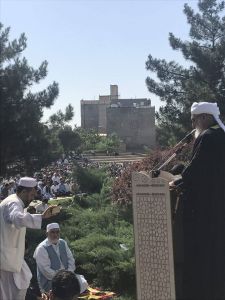 Mashadi Persian Sunnis (Hanafis) only differ from the Shias of the city and region in the way they dress; Most Persian Khorassani Shias wear western style clothes wheras Persian Khorassani Sunnis wear Shalwar Qamiz like most Muslims in the Khorassan and central Asia region, hence they are not to be confused with Afghans (majority of Afghans inside. Iran are Shia, particularly in Mashad city).

Sunnis in Mashad are often pushed outside the city to rural areas and many of their “mosques” (around a dozen in Mashad) are actually so called “Namaz Khanehs” (prayer houses like in Tehran). The biggest Sunni Mosque of Madhad, the famous Shaykh Fayz mosque (very close to the Imam Rida “shrine”) was demolished in the 90s by the order of Khamenei himself; hardline Shia clerics have always expressed their hatred for the native Sunni community and in particular for the visible and large Shaykh Fayz mosque that wqs turned into a public park.