Persian Kharijis once ruled Algeria and other parts of North Africa and defeated (along with the Sunnis) the Rafidis.

The Rustamids (767-909) – founded by a Khariji missionary named ʿAbdu r-Rahman ibn Bahram ibn Rustam (Rustam being a pre-Islam Sassanian name which is still very common amongst Shiites in Iran. Rustum is the historical general who fought at the Battle of al-Qādisiyyah for the Sasanian Empire, and ultimately lost and saw Persia being conquered by Islam) were a dynasty of Ibadi Khawarij Imams of Persian descent that ruled mostly in the central Maghreb for a century and a half from their capital Tiaret (in modern Algeria) until the Ismaili Fatimid Caliphate destroyed it. Their realm extended mostly to current central Algeria, but also Libya, Morocco and Mauritania. Despite their (light) Khariji theology, they were just rulers and allied with Sunnis in fighting against the Rafidi Fatimids.

Small pockets of Khariji Ibadi communities are still present in Northern African states, particularly in Algeria which has the largest Ibadi population after Oman.

Rafidi propagandists always brag about the so called “Fatimid dynasty” (an insult to link Sayyidatna Fatimah, ‘alayhas-Salam, to these heretics, hence scholars prefer to refer to them as “Ubaydis”, one of the “Fatimids” Shiite founding fathers who declared himself as the awaited Mahdi!), which ruled northern Africa (and was completely destroyed by Salah al-Din al-Kurdi) claiming that thus North Africa was once used to be Shiite. This is absolutely incorrect, it’s like claiming Syria is an majority Alawite (Nusayri) country to the ruling family and the Shabbeeha thugs being Alawites. As a matter of fact, every researcher and historian specialised in Islamic-Egyptian and North African history will assure you the “Fatimid” (Ubaydi Isma’ili Rafidis) dynasty itself and its ruling class where Shiites, the Egyptians and the people of the Maghreb under their rule have always been Sunni and are still virtually all Sunni to this very day. 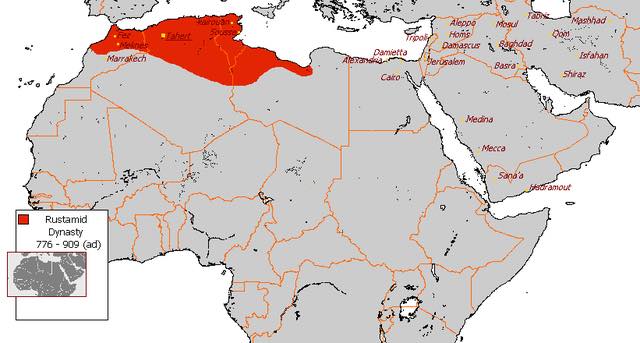 PS: Pagan symbols such as the so called hand of Abal-Fazl, that are not just carried in bizarre self-beating Shiite rituals but sometimes also placed inside and on top of Shiite temples, and are also common among other pagans such as Hindus and satanic Kabbalist Jews, have found their way to Northern Africa through Shiism (ie the “Fatimid” dynasty).

It is hence very common in North Africa, especially in Morocco, Tunisia and Algeria to find Muslims (especially women) wearing this pagan symbol, which instead of carrying the symbol of being the chopped off hands of “Abal-Fazl” (martyr and half-brother of al-Hussein Ibn Ali at the battle of Karbala) stands for the protecting hand of Fatimah. This pagan Shiite-Jewish-Hindu symbols even appears on the national emblem of Algeria in front of the Atlas Mountains.