The Mullahs are at it again. Shaking hands with the “evil” west while at the same time chanting empty slogans at the west such as: “Marg bar Amrika” (death to America), “Marg bar Israel” (death to Isreal), “Marg bar Engelis” (death to England). In action all these slogans actually translate to: “death to Sunnis in Syria, Yemen, Iraq”, as the only death (and havoc) the Shia regime has caused, is in Sunni lands and not in Israel let alone in America or Britain. Not a single bullet has been fired on Israel by Iran (whereas even Saddam Hussein fired 26 scud missiles at Haifa or Tel Aviv, something Iran never did nor will ever do).

Agreed, they are good at carnevals of (empty) slogans. The Shia regime is actually very good at that (and it works to fool quite alot of gullible folks, including many ignorant Sunnis).

And now it’s official, the Shia regime of Iran made officially peace with the west (Khameneis empty slogans about the ongoing struggle against America – despite the deal – will fool nobody but his own blind followers), the Europeans, Americans and Iran have reached a nuclear deal a few hours ago. The governments of Britain, France, Russia (atheist ally of Iran), China (another atheist ally of Iran), the US and Germany agree to lift all UN sanctions on Iran, including access to an estimated $100 billion in frozen assets overseas? Would the west even consider such a move if Iran would be a general threat to them, in particular Israel Certainly not. Iran’s aim is to cause havoc in the Islamic Ummah and the west despite its difference with Iran still needs Iran as a fortress in a Sunni sea.

We believe it is incorrect and simplistic to believe that Iran is literally allied to the west, Israel and America. What is more correct and closer to the truth, based on emprical evidences is that their relationship resembles the relationship of two cousins who hate one another due to some disagreements, yet in the end of the day they are still cousins i.e. they will most likely unite against their shared enemies. So when it comes to oppose their enemy number one (Muslims, Sunni), the two cousins (the west and Iran) always unite and Iran perfectly functions as a Shia stronghold in a Sunni sea in order to cause havoc (see Iraq, Syria, Yemen) and to prevent any real Sunni uprising and control (note how Iran supported the west and in particular America in their wars in Afghanistan and then in Iraq where American installed and Iranian trained pupptes such as Nuri Al-Maliki have been given the highest position in the government). 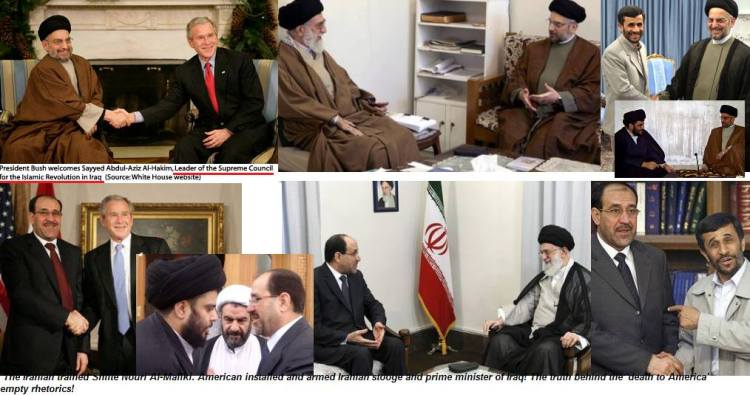 “Neighbouring Iran says it opposes US intervention. Supreme Leader Ayatollah Ali Khamenei accused Washington of “seeking an Iraq under its hegemony and ruled by its stooges”.” [BBC News]
And what does that make Maliki, a man raised in Iran (by the Revolutionary Guards), who speaks fluent Farsi and along with the doomed Ayatollah Abdul-Azeez al-Hakim was a frequent guest and favourite choice of Rum-has-fled (Rumsfeld) Bush and co?. The Safavid, non-Islamic regime wants greater direct control of Iraq to further consolidate Shia control of the region, minus any leftover American influence (after they purposely handed it over to the Rafidah, their most trusted allies in the region on a plate).
This turbaned mafia have literally perfected the art of hypocrisy

Could you imagine the west shaking hands with a Sunni Muslim stronghold that openly chants Anti-western slogans, wishes death to a number of western states? Of course that’s impossible, such a (real) Muslim state and stronghold would have been bombed within second, this is why you see the west bombing Sunnis everywhere, any Sunni uprising, any Sunni leadership, no matter how moderate (like the Ikhwanis in Egypt) or how extreme (such as ISIS) has been systematically been removed (either directly or through their agents and puppets). Only when it comes to Iran we see the west becoming soft (even in Iraq where the Shia regime asked for Imam Barack Imam Hussein Obama’s Air Force to help bombin Sunni areas, so that at the aftermath the likes of Qasem Sulaimani can enter the scene as Rafidi Rambos and claim victory), this is because in the end of the day, the west knows very well that Iran’s slogans are empty talks, a farce a show to attract the Muslim masses with Anti-Imperialistic, Anti-American and Anti-Israeli slogans. 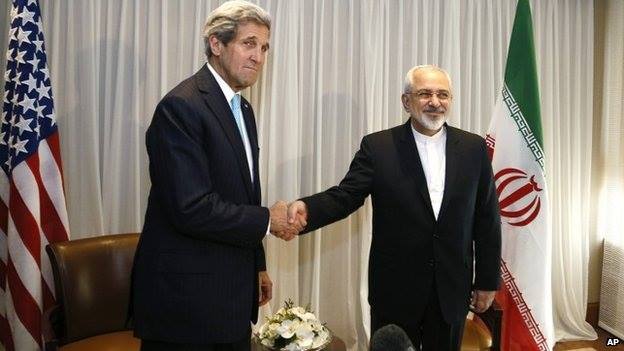 From the beginning of the Revolution, the regime repeated the well known slogan among all Iranians:
‘دیانت ما عین سیاست ماست ‘
(“Our RELIGION represents our POLITICS”)