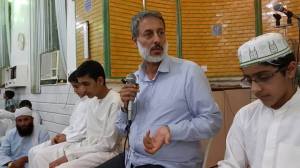 Shaikh Mohammad Saleh Pordel is an ethnic southern Persian from the Hormozgan province. He (like the majority of the NATIVE Persians in the south) is Sunni adhering to the Shafi’i school of thought. He’s the student of the late great Shaikh Mohammad Saleh Ziyaie (one of the first Iranian students of the Madinah University), may Allah have mercy upon him. Shaikh Pordel is well known and very beloved in the Iranian Sunni community, he is even known in Afghanistan and Tajikistan (where he appeared on state TV, yet the national TV of Iran never reported about him, let alone having him have a single appearence or show on national TV).

So far – and Allah praise is due to Allah – he managed to avoid any trouble with the Iranian Shia authorities, one reason might be that he is an extremely influencial and beloved figure in the southern Persian Sunni community, also he is not politically active at all, and he does not travel to Shia areas, so that might be one of the reasons while the Iranian regime haven’t imprisoned him or assassinated (like in the case of his Shaikh Ziayie who was found mutiliated in the deserts!).

May Allah preserve Shaikh Mohammad Saleh Pordel and all the Muslims and Ahl Al-Sunnah in Iran and around the world.