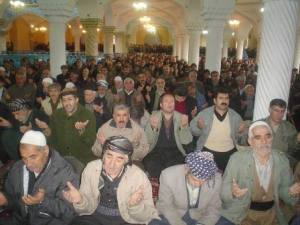 The Iranian security forces raided a Sunni mosque on Monday during Eid prayers in Sanandaj, Kurdistan province of Iran.

The mosque, located in the town of Kani Kozaleh in Sandandaj, was raided by the security forces whilst worshipers were performing Eid prayers.

There are reports that security forces were also deployed in other parts of the city to prevent Sunni Muslims from holding Eid prayers in several Sunni mosques across Sanandaj.

The Sunni Muslim community of Sandandaj, along with the majority of the Muslim world, celebrated Eid on Monday 28 July 2014. The Iranian Shia authorities, who instead claimed that Eid was on Tuesday, seemed intent on preventing the Sunnis of Sanandaj from celebrating Eid on Monday.

‘The Guardian’ news website also reported that Sunni Muslims were banned from holding Eid prayers in Tehran at the end of Ramadan in 2011, with security forces preventing Sunni worshipers from entering the buildings they had rented to perform prayers.

The article from ‘The Guardian’ stated that “in recent decades, Iranian authorities have refused Sunnis permission to build their own mosques in Tehran. There is currently no Sunni mosque in the capital, despite there being several churches and synagogues for much smaller Christian and Jewish populations.”

In a ruling highlighting Iran’s suppression of Sunni worship, four Ahwazi Sunni converts were sentenced to imprisonment and compulsory participation in Shia rituals after a court ruled in May 2014 that they had ‘engaged in propaganda’ by performing activities including celebrating Eid ‘at the same time it was announced in Saudi Arabia’.