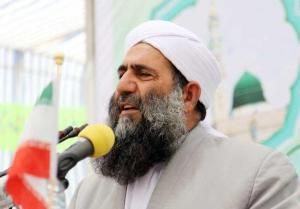 “SunniOnline” reports Molana Ahmad, the Hadith teacher at Darululoom Zahedan and one of the leading men of the Iranian Sunni community passed away in a road accident when he was traveling to a nearby town. In the accident his son and driver received injuries.

According to our reporter, “Khoda-Nazar Narui”, a close relative of late Mawlana Ahmad succumbed to his injuries on the way of hospital.

The funeral prayer of late Maolana Ahamd Narui will be offerd tomorrow at 10 A.M (local time) in the grand Mosalla of Ahl-us-Sunnah in Zahedan.

Some media sources claim another senior teacher of Darululoom Zahedan, Molana Abdol-Ghani Badri, also wounded in the incident; while he was not accompanying late Maolana Ahmad and now he is safe.

The SunniOnline Team expresses its deep sorrow over the incident conveying condolences to Shaikh-ul-Islam Maolana Abdul-Hamid, the family of late Maolana Narui, the Sunni community of Iran, personel of Darululoom Zahedan and his other followers.

A photo after the accident 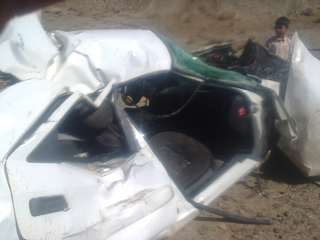