Over 20 Sunni prisoners in the notorious Rajahie Shahr prison, near Tehran (near the city of Karaj where a good number of Sunnis live) are going to be executed by the Rafidi regime simply due to the fact of being Sunni activists. We remind you to keep them in your prayer and sign the petitions (and really do an effort and pass them and make them viral as much as you can) that we have put in our PREVIOUS ARTICLE HER>>>. The following video is from the Sunnis inside the prison who praying in congregation, remember that over 20 of them are facing execution, including the Imam, the brother who is leading the prayer: 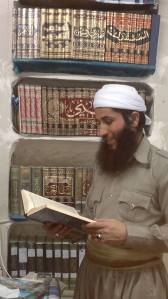 He (like most of the prisoners) hails from a well-respected religious family of scholars, in the following clip you can see him (leading) and other brothers praying in the midst of Shirkistan, the Rafidah Republic (do not forget to sign the petitions, ALL of them, HERE>>>):

NOTE: Although the Iranian Safavid Rafidite regime does suppress and has executed a number of ethnic Persian Sunnis (Larestanis, Khorasanis, Hormozganis like Shaykh Zia’ie etc.), yet the regime is known to be extra harsh towards any Sunni activity among the Iranian Kurds, this phenomena probably roots in the teachings of Shi’ism itself that portrays Kurds (similar like Arabs) in the worse way possible (we have covered this topic in THIS ARTICLE HERE>>>).