Lately there are so many arrests and even executions of Iranian Sunni activists and scholars going on, we seriously have to apoligise first and foremost to our brothers in Iran and then to our dear readers, it is hard to keep you updated keeping in mind that we are a very small team. The latest case is quite shocking and reveals the evil policy of the Iranian Rafidhite Safavid regime which aims to extinguish the very existence of an academical Sunni community of Iran by getting rid of the major Sunni scholars of Iran, it’s really befetting to quote an exiled Iranian Sunni scholar (we posted an Interview with him HERE):

‘I still recall what the Iranian secret service said vengefully to some of the imprisoned Muslim activists: “You are like the large room with large spotlights (the more eminent scholars) and smaller lights (the general scholars), and candles (the general activists); we will first extinguish the large spotlights.” This stage has been accomplished as they have killed most of the prominent scholars. “Then we will extinguish the smaller lights”; in this respect many activists have been killed and many others exiled. “Then we will turn the fan to put out the candles.” This is an indication of the final stage of forcing people into Shi’ism against their will.’

Friday prayer and Sunni scholar of Raask city located in Sarbaaz, province of Sisitan & Balochistan in Iran. He has been in jail since March of 2012, and reports state that the charges “have not been proven in a fair and official court” and it warns against highlighting sectarian divisions in Sistan-Baluchistan Province.  He along with  11 other Sunni activists are going to be executed.

He is going to be executed under the pretext of having assassinated (!) another other ‘Sunni’ scholar, the infamous Molavi Mostafa Jangi Zahei, an open stooge of the Iranian regime, a Basiji (!) who openly not just worked for the Shia government but even joined the paramilitary volunteer militia (Basij) of the Shia Mullah regime. Molavi Nakhshbandi under the usual unjust and brutal interrogation of the Iranian regime ‘confessed to his crime’, of course these forced confessions are worth nothing under no court whatsover let alone an Islamic one.

‘Sunni’ Basiji, Molavi Jang Zehi, one of the biggest Sunni stooges of the Iranian regime one of the HEADS of the Basij paramilitary of Balochestan!

These non-proven accusation that are usually thrown at Sunni activists to get rid of them. It is worthy to note that Molavi Fathi Nakhshbandi was a thorn in the regime’s eye for unlike other sell-out ‘Sunni’ scholars he was never ready to be a stooge of the regime, his religious centre too was a thorn in the Iranian regime’s throat since it did not comprise when it comes to traditional Sunni beliefs which are of course in contradiction to many Shia practices which are deemed heretical in traditional Islam (Sunnism).

The southeastern province of Sistan-Baluchistan has a large Sunni community, which has often voiced concern about the lack of state support for its needs.

The Zahedan Imam of Suunis, Molavi Abdul-Hamid, dismissed claims that the Sunni community is subversive. In a meeting with Sunni university students, Molavi Albolhamid said: “We do not ask for too much but we believe that in the 34 years since the Revolution, the Islamic system has had many opportunities to meet out justice and recognize the dignity of the Sunnis. And still some officials are asking for more time… until when?”

The Iranian Sunni channel ‘NOUR TV’ dedicated a number of shows in support of Molavi Nakhshbandi (in Farsi only):

After being imprisonment for over two years based on false charges the Shaykh was finally released. Huge pressure from the Iranian Sunni community+50 billion (!) Iranian Riyal had to be paid! 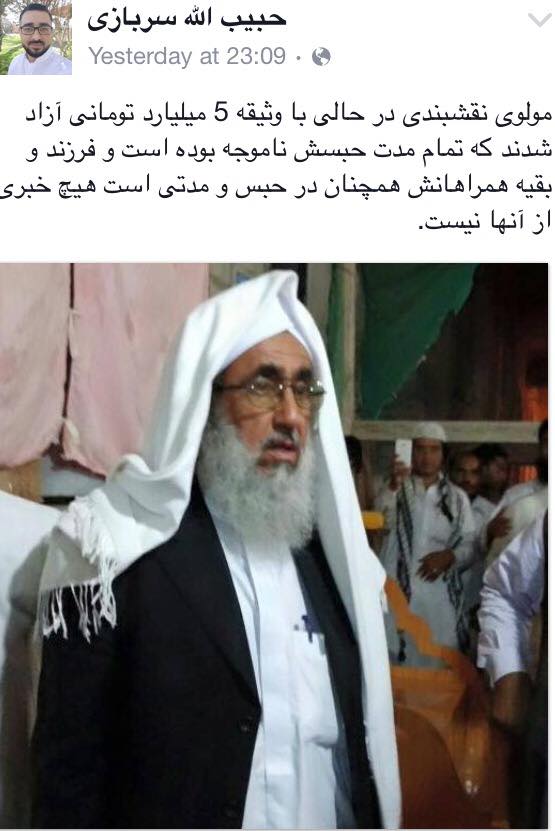