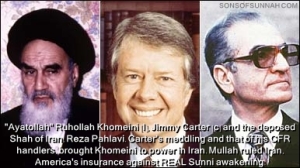 Have you ever seen the western world watching how a (as they call practicing Muslims) Islamist is sitting in their backyard and calling for an Islamic state (and removing one close ally of the west themselves!) in his native country? Have you? Let’s spice it up, imagine that a, Islamist’s sitting in a country that is one of the close allies of the “Great Satan” (America), yet that country grants that Islamists not just asylum, rather once that “evil Islamist” achieved what he wanted (the ALLY of the west in his native country being forced to leave) the very same western country puts the ice on the cake for the Islamist and chauffeurs him peacefully to his native country.

Of course this is impossible you might think. Yes it is, unless you are a Shi’ite, an “Ayatollah”, like Khomeini>>>. It seems the west knew exactly what they did. Of course it is one think to claim that the Mullahs are actually close-hidden allies and stooges of the west (one extreme) and another thing to claim that these Mullahs and the Rafidi regime with their empty “Shia-Sunni unity” rethorics and “Death to America, Israel, England” etc.chants are THE arch-enemies of the west and the supporters of the Muslim world (the other extreme). Both theories are no doubt far from the truth and facts we are even facing today, but one thing no honest researcher can deny is that the Mullahs were and are the lesser evil to the west. To understand this we have to take a look into the eightees. The Shah was getting to self-confident and there were many reports suggesting that the Shah wanted to free himself from the shackles of the west, no doubt this was something the west, especially America did not want to happen, so they had to get rid of him, one way or the other.  Here is something you won’t even see in your wildest dreams on Iranian Mullah state TV:

Doesn’t sound like a very obedient dictator anymore, does he?

And there is the sister of the “Great Satan”, the UK. The Shah during the last stage of his regin was not very keen on them either:

Many facts suggest that the Shah was no longer of use for the west, particularly America, so they had to get rid of him or to say the least, they had to let him down when The Mullahs were conspiring their way to power. This is not about defending the Shah, let alone exalting him to an Anti-capitalism hero, rather it is the plain truth, the Shah was oppressive but he wanted good for his country, the West, especially America realised that, the Shah knew they did, so he started exposing them, all of them, including the vile Jews and the British.

Now it is excessive to claim that the Mullah’s and the west are actually one and the same coin with different sides, because they were and are conflicting interests between the two parties, one has to be just. The Zionist lobby and the US might get eventually fed up of leaving a country into the hands of the Rafidite clergy/The Mullah’s, a country of the importance of Iran, a country which controls the strait of Hormoz which is an geographic chokepoint and a main artery for the transport of oil from the Middle East. But nevertheless, this does not negate that the Mullah’s are still the lesser evil and an important parasite to the west, a parasite that is much needed to confront the Islamic awakening by weakening it through an internal enemy.

On the other hand it is of course far-stretched and actually very naive to believe that Khomeini besieged the western world, especially America (although his plane took off from France, America’s ally and France basically chauffeur Khomeini to Tehran!).

Now history is exposing the Rafidite Safavid regime and its clergy and proves their real agenda, their crimes against the Muslims for which the Rafidites were known from day dot>>> .

The “Death to America/US/UK” chant of the Iranian regime have really become lame, they do not impress anyone anymore, actions speak louder than words and after thirty years of shouting hot air, the world especially the Muslim Ummah have seen nothing but empty rethorics and in fact betrayal, for when it came to action everyone could convience himself that the real enemies of the Rafidite Shi’ites and the Non-Islamic, heretical Rafidite Shi’ite Regime of Iran are Muslims/Sunnis. Starting from the persecution of its own Sunni minority up to onslaught of the Iraqi (Iraqi “Jaysh Al-Mahdi” death Squads) and Afghani population due to the “Islamic Republic’s”  alliance with the “Great Satan” (when it comes to oppose Sunnis): 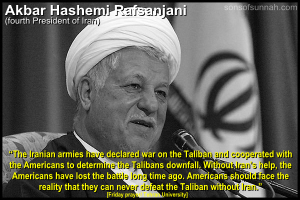 Their treachery is nothing new, they always allied to the bloodiest pagans and polytheists when it came to weaken and oppose the Muslim Ummah:

Ferdinand, the ambassador to the Austrian King remarked, “Had it not been for the (Shi’ite) Safavids in Iran, we would have been reading the Qur’an this day like the Algerians,” meaning that his nation would have been conquered by the Ottoman Muslims. But it was the Safavid state that kept the Ottoman state busy with fighting the Safavids, instead of the crusaders.

Now this is the balanced view, the Rafidite Safavid Shi’ites and the west (especially America and Israel) are like two cousins (allies) who although hate each other (this hate is not really based on creed for blood is thicker than water it is based on conflicting interests) are after all still cousins (allies with other shared interests) and they both agree on their common enemy. The common enemy is represented by the Muslims (Sunnah), especially those who are eager to form a state, those who oppose  and expose Shi’ism and are anti-western/capitalists at the same time. When it comes to this common enemy (the Muslims) the Rafidite Shi’ites’ are the best choice and lesser evil for the west, and America/Israel/the west are likewise the best choice for the Mullahs.

The American they knew that hence they helped Khomeini to come to power. Rationally, putting a regional power like Iran into the hands of the Rafidah Shia clergy, the likes of Khomeini who openly praised the Safavids will be a advantage to the west for it causes alot of problems (mainly for the Muslims), especially regional one (see Iran’s involvements in Lebanon, Yemen, Bahrain, Saudi etc. Iran’s allies are Communists like Venezuela, China and former ones the Russians, yet Iran’s enemies are the Arab  Muslim states!) and keeps the Muslims busy with a tiny heretical sect that is suddenly running a massive state. And today, right now at this very moment is proves that the so called “Great Satan and the little one” (America and Israel) have not faced 1% of the cruelty and enmity that the Muslims have faced from the Rafidite Safavid Iranian regime and its allies: 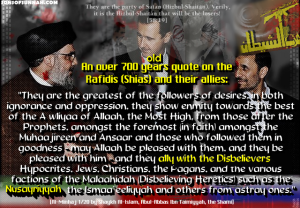 The blind followers of the Ayadollar$ will certainly reject the facts (afterall they are blind followers), they just won’t accept that the (un)holy mad man, polytheist and pagan Rafidi Khomeini was not the defeater of the west, rather he was the lesser evil for the west, they basically let him do, and he and his followers are doing well in causing problems for the Muslims. Yes, there might be a day when the west will get rid of the Mullah’s (just like when they got rid of their former ally the Shah), but until then they will play the game of empty rethorics to fool the gullible ones: 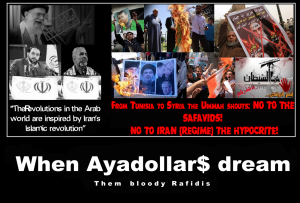 As for those who seek the truth, then it should be clear that the  Iran–Contra affair did indeed prove that Iran is a lesser evil to America/Israel than any strong-Sunni Muslim country, therefore it is not suprising nor a conspiracy theory that the US actually wanted their new pet dogs (the Mullahs) to replace their former one:

“Khomeini will eventually be hailed as a saint,” said Andrew Young, Carter’s ambassador to the UN.

The polytheist crusaders knew very well what they did, they knew that Shi’ism by its very nature advocates the worship of the death AND the living. Not that there isn’t enough exaggeration with “saints” in Shi’ism, thanks to the Americans, the hailing of Khomeini has become true too, who know when they’ll invoke him and worship him directly, as for now, then his image is all over the country, everywhere, even on top/inside of Mosques, plenty of statues (!) of him, and there’s even a Card board verision of him>>>.