Mehdi Bazargan Iran’s first prime minister after the Iranian Revolution of 1979. On 4 February 1979, after the revolution forced the Shah to leave Iran, Bazargan was appointed prime minister of Iran by “Ayatollah” Khomeini. He said a historical statement that couldn’t be closer to the truth, a fact that every Iranian (no matter of what ethnicity, religion or political thought he may be) and many non-Iranians will 100% agree with, weither it be linked to the Iranians outside or inside of Iran. Mehdi Bazargan said:

In an interview with Mehdi Bazargan in 1994:

“The result of 23 years of (Prophetic) mission of the noble Messenger of Islam was the following verse:

In the name of Allah, the Beneficent, the Merciful,

When there comes the Help of Allâh and the conquest, And you see that the people enter Allâh’s/God’s religion in crowds (“… yadhkhuloona min-Deenillaahi afwaaja  …”)

So glorify the Praises of your Lord, and ask His Forgiveness. Verily, He is the One Who accepts the repentance and Who forgives.  [Surah An-Nasr, the noble Qur’an].

Yet what we’re witnessing after 15 years of (so called) Islamic Republic is rather the following:

and unfortunately the people of Iran have become “خسر الدنيا و ‏الآخرة” (losers in wordly and Hereafter wise).” 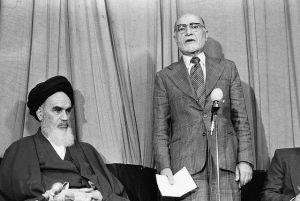 sonsofsunnah.com comment: We can’t even imagine that the most radical Shi’ite on earth, especially Iranians will disagree with the above statement. It is simply true, not overstated nor understated. We could say that it is an IJMA’ (a consensus) amongst every single sane Iranian, that the Shi’ite clergy has achieved what the biggest enemies of Islam could have never ever even imagined i.e. in less than 15 years after the Iranian Revolution (let alone today after over 3o years) the have turned a massive number of Iranians INSIDE and OUTSIDE of Iran away from Islam. Christianity is spreading like a wildfire in Iran (although Christian missionary work is very, very restricted), so is Zoroastrianism coupled with extreme hatred for EVERYTHING that even looks Islamic.Iranians are STILL representing one of the largest groups of refugees worldwide. And ironically it is mostly the Khomeinian generation i.e. those who were born, raised and educated by the Khomanian regime who hate it most and due to their hatred and distress (by linking “the Islam of the Prophet’s progeny” i.e. Rafidi Shi’ism with ISLAM) and grudge they hold for the Mullah clergy they leave Islam or what they’ve thought to be Islam (Rafidite Shi’ism) altogether.

It reached a point where Rafidi Mullahs don’t dare to walk down into certain areas of Tehran (THEIR CAPITOL!):

No sane and educated person would deny these facts and as for us Sunni Muslims in general and particularly us Sunni Iranians then the outcome of the Khomeinian regime and the Shia clergy is exactly what Rafidi Shi’ism has been made for i.e. destroying Islam from within, giving it a bad image. Although there is a very important point that is and will be never raised by those Iranian extremist national groups and their adherents, who proudly propagate that ALL Iranians are about to leave Islam completely. Well, they (just like the Rafidi Shia clergy) always forget the largest religous minority of Iran, namely us Sunni Iranians who – everyone can check if for himself by visiting Iran – are by far much more religious than their Shi’ite counterparts. Although Sunni Iranians are mostly very poor and being treated like third class citizens, yet their Mosques are filled and one will never find such a degree of irreligiosity like among the Shia population of Iran. In fact, many Shia Iranians who did not fall for the propaganda of Christians (Jesus/Man worshippers), Zoroastrians (Fireworshippers who CLAIM to be Monotheists) are turning to the religion of Saadi Shirazi, Omar Khayyam, Attar Nishaburi etc. i.e. Islam and Sunnah (Ahl Al-Sunnah). We did not made this up though, that’s the confession of one of the close “Ayatollahs” and footsoldiers of Khamenei:

So those who claim that Iranians are becoming more and more apostates are true, but that certainly does not count for us Sunni Iranians. We are proud of our our religion so the enemies of Islam can die in their grudge collectively (Rafidi Shia clergy and their followers and extremist nationalists).

May Allah bring that day when way of the Sunnah  dominates over the Persians again, and that they again be the active propagators, guardians and soldiers of this Millah of Ibraheem as they were before. May Rafdism (Twelver Shia) be expunged from its roots and may it face an erosion, extinction and decline the same way as Zoroastrianism had experienced before.