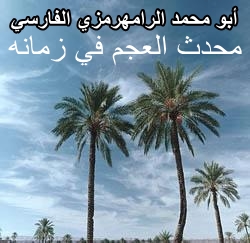 It is said that Al-Rumhurmuzi was the FIRST PERSON ever who had categorised the science of Hadith system (terms etc.). Although (according to some) it is more correct to say that it was Imam Al-Tirmidhi (from Persia/Khorasan city of Termez).  A contemp. scholar of today named Shaykh Abdallah Al-Sa’ad says that if we were precisely  then Imam Al-Shafi’i (in his book “Al-Risalah”) already set some basics for the science of Hadith (as have others like Ibn Hibban etc.), yet Imam Al-Ramhurmuzi basically set a complete scheme hence he is normally referred to the fist person ever who had categorised the different science of Hadith. This is acknowledged by one of the Kings of Hadith science Imam Al-Hafidh bin Hajr who said:

Al-Hafidh bin Hajr – may Allah have mercy upon him – mentions in “Al-Nakhbah” that the first person who had classified this science [of Hadith] was Abu Mohammad Al-Ramhurmuzi (passed away in Hirji 360 […].

Therefore Al-Ramhurmuzi stands out because he was the FIRST ever who had written an entire book SOLELY about the science of Hadith, hence he is referred to as the “first”, may Allah have mercy upon him.

المحدث الفاصل بين الراوي والواعي/ “Al-Muhaddith Al-Fasel Bayn Al-Rawi wa Al-Wa’ie”
A brother (Arab Bahraini Student of Knowledge) who went through the following book and came to the following conclusion:
I don’t think that any Arab has read parts of the book without feeling jealous towards the Persians. There is so much praise towards them, and it is surprising how many of our old scholars were originally Persian.

Here a beautiful clip where a Kuweiti scholar proves the corruptness of the Rafidite sect and the proud of every Muslim when it comes to the science of Hadith (i.e. Al-Ramhurmuzi):