After the Ramadhan and the Hajj break 2011, we are glad you inform you that the show ” “دعوتگران به جهنم” (Callers to the Hellfire i.e. the Rafidah Shia clergy, launched in summer 2011) started to broadcast again, mo-sat 1.00pm GMT Time (London), 4.30pm Tehran time.

We’d like to inform you about a new show on Wesal Farsi TV called “دعوتگران به جهنم” (The Callers to the Hellfire i.e. the Rafidah Shia Turban-Mafia also known as “Ayatollah’s”). Like all shows it’s in Persian language, presented by a host and an Ustaad (Khaled Ansari, Ex-Shia and author of one of the most notorious Shia refutation sites in persian language http://www.islamtxt.com). The show is a response to a bunch of Farsi Rafidi channels inside and outside of Iran who are busy attacking the beliefs and the companions of the Prophet – peace be upon him – day and night, 24/h a day. Ustaad Khaled Ansari who has hold countless debates with …

various Shia scholars and debators analyses and refutes all the so called “shia proofs in Sunni books”, yet the show is not about refuting the Rafidi allegations only i.e. taking a defensive stance, rather a major part of the show is to proof that Rafidi Tashayyu’ (Shi’ism) has no connection to the blessed progeny of the Messenger of Allah, rather it is pure paganism and polytheism in their NAME. 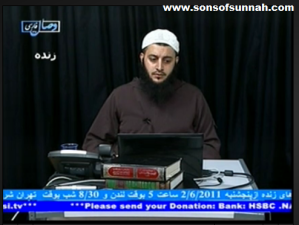 You can watch the show on Wesal Farsi TV (1pm UK time, 4.30pm Tehran time) you can also watch it online on wesal-farsi.tv. Note that this is the first time ever in over 500 years of Rafidite-Safavid domination in Iran that the Ahl Al-Sunnah of Iran can respond to all the lies and allegations of the Rafidi Shia clergy, for inside Iran the Ahl Al-Sunnah are not even allowed to own a Radio station, let alone a channel that broadcasts their voice.