We already wrote a lengthy article exposing the true un-Islamic, rather anti-Islamic nature of the Rafidi-Safawi regime of Iran, showing how Tehran – the only capital in the world – has no Sunni Mosque whatsover (even Washington D.C., i.e. the “great Satan” has plenty of Sunni Mosques!). It is astonishing how scared the Rafidi Regime is of a SINGLE Mosque for Sunni Iranians in Tehran (eventhough there are PLENTY of churches, Zorastrian Firetemples and even HIGHSCHOOLS and even SIKH Temples!), but on the other hand one must have some understanding for the Rafidi Mollahs for:

1. It is no secret that they are the most hated creatures inside Iran.

2. As a result, people leaving Shi’ism in masses and many become Muslims.

Taking all of that in consideration it is somehow understandable why the Rafidi-Safawi regime does anything to prevent a Muslim-Sunnah Mosque in Iran, for once the Iranians in the fortress of Shi’ism (Tehran) are at least allowed to have the opportunity to visit a Sunni Mosque nearby and check how normal Muslims behave (i.e. not hitting themselves like wild animals, cursing day and night, invoke endless of Imams), then the Regime will probably face more conversions than the Rafidi Priest (Daneshmand) in the clip above can even count and imagine).

So today we had the blessed day of Eid Al-Fetr, the biggest Eid according to for Muslims (unlike in Shi’ism where Nowrooz and particularly Ghadir is called the EIDULLAH AL-AKBAR!). Whereas Sunni Muslims can rejoice and celebrate, even in Washington D.C. and in Haifa/”Israel” we can see that the Sunnis of Tehran (who make up the LARGEST religious minority, far bigger than Christians and Jews etc.) are still struggling to get a approval for a SINGLE MOSQUE in Tehran. Most Sunni Iranians live in West Tehran/Sadeghiyeh and they were JAILED many times when they tried to hold congregation Friday prayers in their VERY OWN area, we reported a few accidents >here<). So eventhough they are the largest religious minority, they are deprived of having a SINGLE place of worship, and this year, in Ramadhan 2011 the Sunnis of Tehran wrote a letter to the President Ahmadinejad, appealing to his conscience and remembering him and the Rafidah “Ayatollahs” of how they shout “Shia/Sunni unity” (empty) rethorics day and night, to allow the Sunnis of Tehran to have a SINGLE Mosque for their daily prayers, especially Tarawih in Ramadhan and the Eid prayers. Here is the letter of the Sunni Iranians to Ahmadinejad:

As you can see this is not reported by some Sunni website, rather it is reported by one of the biggest and most notorious Iranian state run websites on the net, >>SHIA-NEWS<<.

Khomeini the charlatan of the 20th century PROMISED the Sunni leaders of Iran DURING HIS LEADERSHIP a Sunni Masjid in Tehran and as we all know he broke his promise and his staunch followers followed him precisely in oppressing the Sunnis of Iran and fooling the Muslims outside of Iran with empty rethorics (“death to America, Shia-Sunni unity” etc.), so what can we expect from a man who never promised the Sunnis anything in the first place? The Rafidah proudly propagate how the Sunni Iranians beg and ask for a SINGLE Sunni Mosque in Tehran, yet some stooges of this pagan Rafidi regime think they can always fool the world and the Islamic Ummah by claiming that Sunni Iranians just do alright in Iran. Yeah right …

It is worthy to mention that Sunni Muslims of Tehran do not have a single mosque in Tehran; they offer prayers with congregation in some renting houses (Rafidi websites propagate these places as “SUNNI MOSQUES IN TEHRAN”, though they are RENTING HOUSES where Sunnis Iranians are even deprived of holding EID PRAYERS!). Last year, also the security police of Tehran forbad Sunnis by force and threat to establish Eid and Friday prayers.

Anway, we wish all of our readers Eid Mobaraka,  May AlmightyALLAH accept your good deeds and forgive your shot comings and do your duty in regards of your deprived Sunni Iranian brothers and sisters and spread their dismal reality and suffer and keep them in your Du’aas.

And here to visualize the hypocricy of the so called “Islamic Republic of Iran” even more, the following are pictures taken from the massive Eid-Prayers in the former communist capital of Moscow. Moscow is by the way the same Kafir-led regime (responsible for the killing of thousand of Muslims in Chechnya), which is a close ally of the Rafidi-Safawi led regime: 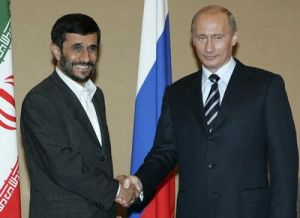 And here the pictures of the Eid-Prayer 2011 in MOSCOW (Even the Russians can’t even imagine being as anti-Islamic as the Safawi regime of Iran).

May Allah destroy the Rafidi regime and their scholars, who refuse to be guided even in this age of internet. Below are pictures from Eid prayers in just one of the Sunni mosques in moscow, and on the pictures, there is just one side shown, and this is in kafir Russia, but no one their even thinks of not allowing Sunnis to have their eid prayers, even though large parts of moscow have traffic jams etc. because of that: 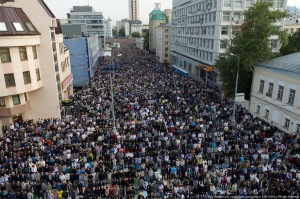