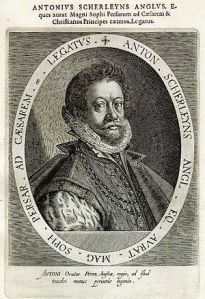 Were Safavids Persian? No. Safavids were Azerbaijanis. They did choose Shia Islam and with the force of the sword killed and forced hitherto Sunni Iranians to convert to Shia Islam.

When the Shias took over the power in Iran they massacred thousands of people as they were not ready to abandoned Sunnism and convert to Shiism.

The Iranian great historian, Kasrawi wrote that 20 thousand people were killed in Tabriz, capital of Azerbayjan, as the Sunnis refused to become Shia. The urgent pressure for converting the Sunni Muslim of Iran into Shia resulted in the disintegration of Iran as Afghanistan, Pakistan, Tajikistan, Uzbekistan, Turkmenistan, Gherghizistan, and all parts of Central Asia seceded from Iran. About three million sq m of Iranians soil seceded from Iran as the residents of these places were not prepared to abandon Sunnis in and convert to Shiism.

This is bigger than Karbala.

The Safavid Shah Abbas converted large pieces of Safavid land traditionally granted to tribal chiefs as assignments into crown lands that he taxed directly. This new military force was trained on European lines with the advice of Robert Sherley (http://www.jstor.org/pss/4299681). Sherley was an English adventurer expert in artillery tactics who, accompanied by a party of cannon founders, reached Qazvin with his brother Anthony Sherley in1598. In a short time Shah Abbas created a formidable army, consisting of cavalry, infantry and artillery.

Robert went with his brother Anthony to Persia in 1598. Anthony was sent to the Safavid Persia from 1 December 1599 to May 1600, with 5,000 horses to train the Persian army according to the rules and customs of the English militia. He was also commanded to reform and retrain the artillery. When he left Persia, he left Robert behind with fourteen Englishmen, who remained in Persia for years. Having married Teresia (aka Teresa), a Circassian lady, he stayed in Persia until 1608, when Shah Abbas sent him on a diplomatic errand to James I and to other European princes, the Persian embassy to Europe (1609–1615). He was employed, as his brother had been, as ambassador to several princes of Christendom, for the purpose of uniting them in a confederacy against the Ottoman Empire.

After Shah Abbas ousted the Portuguese from the island of Hormuz at the entrance to the Persian Gulf in 1622, Bandar Abbas (Port of Abbas) became the center of the East India Company’s trade. But Later the Dutch East India Company received trade capitulations from Shah Abbas. The Dutch soon gained supremacy in the European trade with Iran, outdistancing British competitors. They established a spice-trading center at Bandar Abbas. In 1623-24 Shah Abbas I launched an offensive against Ottomans and established control over Kurdish territories, Baghdad and the Shi’a Holy Cities of Najaf and Karbala.

In the 16th and 17th centuries, Persia tried to obtain support among European nations against the expansionism of the Portuguese and the Ottoman Empire. Since France was tied into a Franco-Ottoman alliance alliance however, the Persian embassy to Europe of 1599–1602 and the Persian embassy to Europe of 1609–1615 avoided France. A Capuchin missions was however established in Ispahan under Pacifique de Provins in 1627.

Trade contacts however existed, and the French trader Jean-Baptiste Tavernier (1605–1689) is known to have been as far as Ispahan circa 1632.

Relations took an official turn under Louis XIV and Colbert, when Colbert founded the French East India Company in 1664, and subsequently asked Lalain and Laboulaye to go to Ispahan and promote French interests in Persia.[1] The Shah welcomed them as he was delighted to be given an opportunity to counterbalance English and Dutch influence in his country. He provided a three-year exemption from customs duties, and gave France the same privileges as other countries.[1] Further, a trading post was given to France in Bandar Abbas.[2]

Another French trader Jean Chardin (1643–1715) visited Persia and received the patronage of the Safavid monarch Shah Abbas II and his son Shah Suleiman I. Chardin returned to France in 1670. The following year, he published an account of Le Couronnement de Soleïmaan (English translation: The Coronation of Shah Soleiman). He again visited Persia and India between 1673 and 1680.

Numerous trade contacts continued to occur between Persia (modern Iran) and France. In 1705, Louis XIV dispatched an Ambassador Extraordinary in the person of Jean-Baptiste Fabre, accompanied by a party including Jacques Rousseau, uncle of Jean-Jacques Rousseau.[2] Fabre died in Persia, but negotiations were taken over by Pierre-Victor Michel, leading to a Treaty signed in September 1708.[3]

Wishing to reinforce exchanges, the Shah sent an Embassy in 1715, led by Mohhammad Reza Beg, the Persian embassy to Louis XIV. The embassy visited king Louis XIV and obtained a new treaty of alliance signed in Versailles on 13 August 1715.[4] Contact were then interrupted with the fall of the Safavid Empire in 1722 and the subsequent troubles, until the end of the century.[5]

Impressed by the Persian visits, the French author Montesquieu wrote a fictional account about Persia, the Lettres persanes, in 1721

9 thoughts on “How Shia Safavids collaborated with the British”