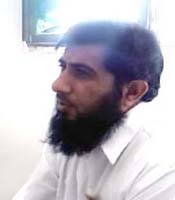 TEHRAN- Mawlana Ubaidullah Mousazade along with some detained Sunni scholars of “Taibad” and “Mashhad” have been released on bail in Tehran and Mashhad lately.
According to a report of “SunniOnline”, imam of a famous and well-oriented Sunni worship place in Tehran, Shaikh Ubaidullah was arrested on Feb. 6, 2011 following the raid of the Iranian Intelligence authorities on the worship place where they sealed it.
He was released on Sunday, March 13 after being in prison for 35 days.
Meanwhile it has been confirmed that some detained Sunni scholars belonging to Khorasan province have been released on bail recently in Mashhad.
However, Shaikh Muhammad Fadheli seems to be still in prison but there is no any information about his detention place. He was disappeared following his dismissal from khateeb status of the Sunni-majority city Taibad in Khorasan Razawi province.